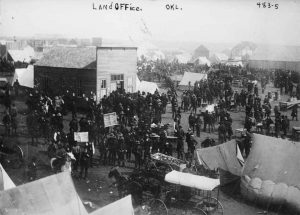 Learn about the first capital of Oklahoma.

Guthrie began its life as a dusty prairie stop along the AT&SF Railroad. On April 22, 1889, the day of the Land Run, (sometimes referred
to as Harrison’s Hoss Race), Guthrie had its first incarnation as a destination, becoming a city of 10,000 people by nightfall.

Located in the Unassigned Lands of the Indian Territory, Guthrie had been chosen as a site for one of the Federal Land Offices where
land seekers were required to file claim to their parcels. By the evening of April 22, a tent city already dominated the landscape.
Wooden buildings soon replaced the tents spreading across the hills along Cottonwood Creek. Guthrie became one of the largest
cities west of the Mississippi and was quickly known for its beautiful buildings built of redbrick and native sandstone.

With the passing of the Organic Act in 1890, Oklahoma became a US Territory and Guthrie was selected as The Territorial Capital.
Seventeen years later, on November 16, 1907, Oklahoma was declared a state by then President Theodore Roosevelt with Guthrie
as the First State Capital.

It was to remain the capital until 1913 when a vote of the people was set to choose a permanent location. As the new state
government grew, and other cities grew to prominence, the political atmosphere became heated between the governor and the
legislature (D) and Frank Greer (R), editor of the State Capital Newspaper. As a result of the squabble, Governor Haskell called
for an early statewide election to decide the issue. On June 11, 1910 by a majority vote, Oklahoma City was selected as the capital.
The state government moved south and Guthrie was left behind. Built as a testament to Victorian elegance befitting the capital of
a new state, the city still retained its style and architectural integrity. It stands today as a National Historic Landmark with dozens of
beautifully restored buildings, perfect examples of late 19th and early 20th Century architecture.

History is brought to life each day on Historic Trolley Tours and in places like the Oklahoma Territorial Museum, The State Capital
Publishing Museum, and The Oklahoma Frontier Drugstore Museum.

There are over 2,000 buildings within the Guthrie Historic District covering 1,400 acres. Thousands of visitors and history buffs have
experienced the magic of this unique territorial city. Guthrie truly embodies the essence of the era and the spirit of Oklahoma.

For more information go to historicguthrieok.com.

"I joined the Chamber to help bridge the gap between the business community, the City of Guthrie, organizations, our schools and neighbors because we are all invested. When we work together with the help of the Chamber, we thrive as a community. "

"I love being an investor in the Guthrie Chamber of Commerce. It's great to be a part of the business community in Logan County. They provide us with a lot of marketing and sponsorship opportunities and our investment is well worth it every year!"

"The Guthrie Chamber of Commerce is a great partner in the community. As an active Church, it is important to us to be connected to businesses and other organizations that value relationship within the community. The Chamber goes above and beyond to make sure everyone stays connected with weekly events and fun activities. We love being a part of the Chamber!"

"The Guthrie News Leader regularly partners with the chamber as our goals are the same: connect businesses to the community. We not only enjoy attending the events the chamber presents, but also co-sponsoring events together. We’ve met new customers, contacts and lifelong friends through the chamber and we consider them part of our team."